Each semester, we bring in leading practitioners to explore with students how to do politics better. The Fall 2022 Fellows bring decades of experience in politics, government and journalism to the Hilltop, and come from different places on the ideological spectrum. While each Fellow has their own area of focus, they share a common goal to work with students to advance the common good, bolster democratic institutions and lead with a service-oriented passion for a purpose larger than oneself.

We are pleased to introduce the Fall 2022 GU Politics Fellows; they’re excited to get to campus and start working with our community! 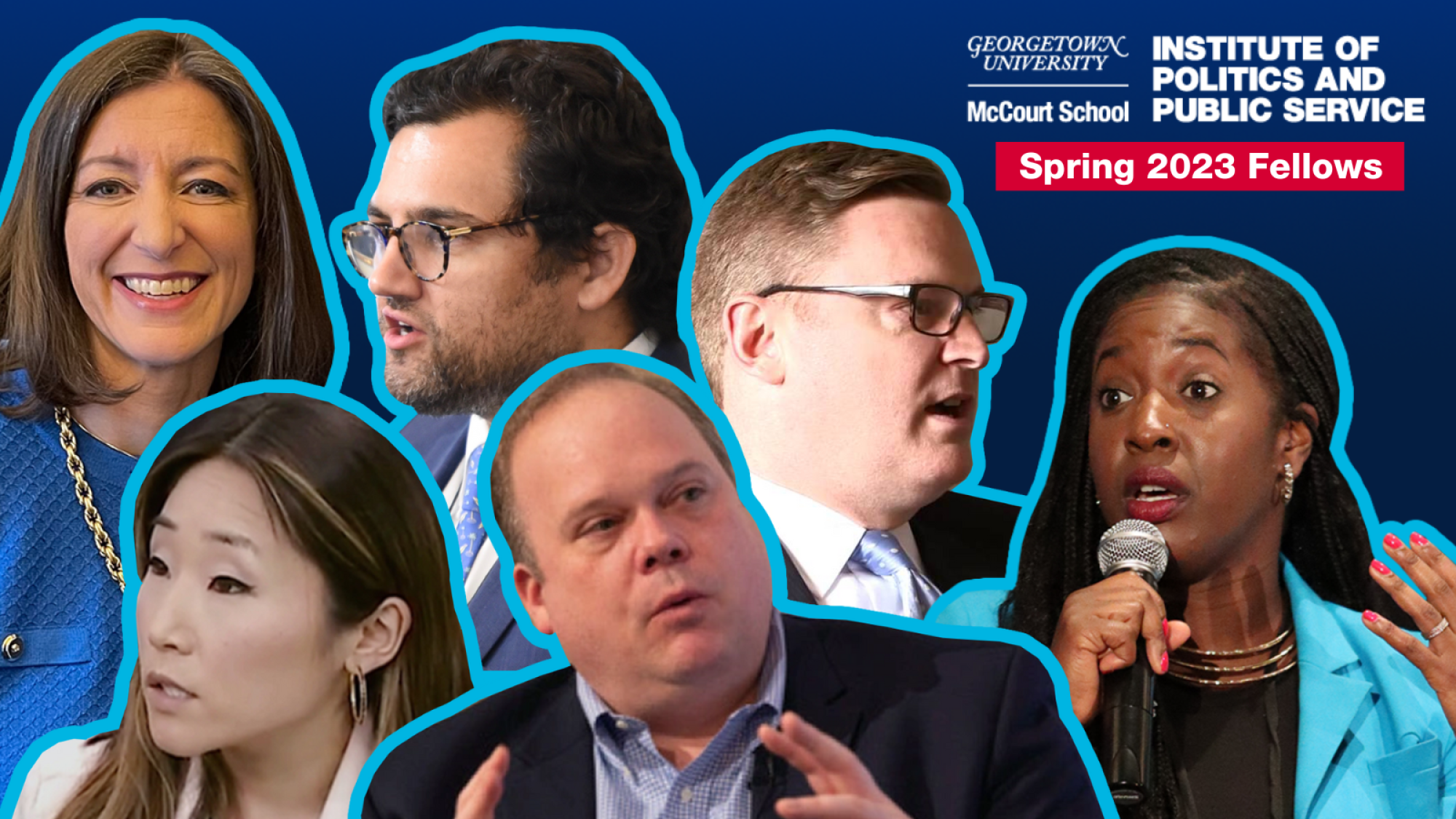 Karoun Demirjian is on the national security team at the Washington Post, where she covered intelligence, defense, and foreign policy on Capitol Hill before becoming a Pentagon correspondent. Her award-winning career has spanned three continents, including postings in the Post’s Moscow bureau, a stint in the Middle East working for the Associated Press, and over a decade covering Congress. She was a member of the Washington Post teams that won the 2022 Pulitzer Prize Gold Medal for Public Service and the 2018 Pulitzer Prize for National Reporting, and individually won or came in as runner up for the David Lynch Memorial Reporting Award for three years running as a Washington Correspondent for the Las Vegas Sun. She has been a frequent featured expert on television and radio outlets, including as a CNN political analyst, and is co-author of the book UNCHECKED: The Untold Story Behind Congress’s Botched Impeachments of Donald Trump, publishing in October. Karoun’s discussion group is called National Security Coverage in a Politicized World.

Katie Harbath is a global leader at the intersection of elections, democracy, and technology. As the chief executive of Anchor Change, she helps clients think through tech policy issues. She is the director of technology and democracy for the International Republican Institute and is also a fellow at the Bipartisan Policy Center, the Integrity Institute and a nonresident fellow at the Atlantic Council. Previously, Katie spent ten years at Facebook. As a director of public policy, she built and led global teams that managed elections and helped government and political figures use the social network to connect with their constituents. Before Facebook, Katie held senior strategic digital roles at the Republican National Committee, the National Republican Senatorial Committee, DCI Group and multiple campaigns. Katie’s discussion group is called Public Policy Solutions for the Internet’s Role in Democracy.

Xochitl Hinojosa is a Managing Director in Bully Pulpit Interactive’s (BPI) Washington, D.C., office, where she leads major political, advocacy, and brand purpose campaigns. Xochitl most recently served as the Senior Advisor and Communications Director for the Democratic National Committee (DNC), where she worked to rebuild the party, led the communications strategy around the 2020 Democratic presidential nominating process, and was a spokesperson for the party during the General Election. Hinojosa has more than a decade of communications experience in key campaign and Obama administration roles, including serving as a spokesperson for the Department of Justice and the Department of Labor.  Xochitl’s discussion group is called Everything You Need To Know About the Midterm Elections.

Alex Lundry is Co-founder of Tunnl, an audience analytics firm. Hailed in the book “The Victory Lab” as “one of the most methodologically sophisticated opinion researchers working in Republican politics,” Lundry has worked as a data scientist, pollster, microtargeter, data-miner and data-visualizer for presidential candidates, national organizations and Fortune 50 companies. He ran the analytics efforts for Mitt Romney’s 2012 presidential bid and Jeb Bush’s 2016 primary campaign. He has been an adjunct instructor of statistics in the Government Departments of Georgetown and Johns Hopkins Universities, and was named a Top 50 Influencer in Politics by Campaigns and Elections Magazine. Alex’s discussion group is called Data in a Digitizing Democracy.

Terry McAuliffe served as the 72nd Governor of the Commonwealth of Virginia from 2014 to 2018. As Governor, McAuliffe focused on equality for all Virginians, enhancing quality of life, and building a new diversified economy that made economic opportunity a right, not a privilege. As Governor, McAuliffe conducted a record 35 trade missions, personally delivering Virginia’s calling card to business and political leaders around the globe and bringing over 1,100 economic development projects to the Commonwealth. McAuliffe, during his four year term, was the most traveled governor in the United States of America, visiting 24 countries on five continents. Governor McAuliffe is a proud Hoya, graduating from the Law Center in 1984. Terry’s discussion group is called The Secret Recipe to Successful State Government.

Mary Elizabeth Taylor is the vice president, head of external affairs at Robinhood. She brings unrivaled experience from the highest levels of public service and international relations, having spent over a decade navigating the senior-most levels of the U.S. federal government and earning an esteemed reputation for building bipartisan consensus in challenging political environments. In 2018, Taylor was unanimously confirmed by the U.S. Senate to be the 32nd assistant secretary of state for legislative affairs, becoming the first African American and youngest person to ever hold the position. She previously served as the State Department’s lead interlocutor with Congress, overseeing a team of 60 department professionals facilitating dialogue and coordination with Congress, in the White House as special assistant to the president for legislative affairs, and as a U.S. Senate floor staffer for Mitch McConnell (R-KY). A native Washingtonian, Taylor was selected for the 2018 lists of Forbes 30 Under 30 and Business Insider’s list of 8 Most Influential Women. Her discussion group is titled Politics of Executive Leadership.

The GU Politics Fellows offer students a rare peek behind the curtain into the way politics and public service actually work. Students will be challenged, informed and inspired through weekly discussion groups, office hours and small group conversations.

Mark your calendar for our Meet the Fellows Open House — the first chance to meet these leaders in person, learn more about their backgrounds and hear what they have planned for the semester. The Fellows open house will be held on Thursday, September 8, 2022, from 4:00-5:30 pm ET in Copley Formal Lounge.