Title: Black in the White House

On February 23, 2021, GU Politics hosted four Black former White House staffers for a conversation about working in one of the most important buildings in the world and how they leveraged their positions to affect change. This event was hosted in partnership with The Blaxa, a student-led organization at Georgetown.

Marlon Marshall (MPM’19), who served as Special Assistant to the President during the Barack Obama Administration and a Spring 2017 GU Politics Fellow, talked about what got him involved in politics: “I wanted to make sure that communities and kids like me had as much of a chance to succeed as possible.”

Minyon Moore, Assistant to the President during the Bill Clinton Administration, discussed the importance of representation in politics, saying, “Every now and then you find yourselves in rooms, where it can be exceptionally tricky for women and People of Color, and you have to make a choice to stand up for yourself and speak up…there is never a time that you should be silent…”

Continuing the discussion on representation, Jona Van Deun, who served as Director of Scheduling and Advance to Lynne Cheney during the George W. Bush Administration, said, “There is a place for you…if I ever see somebody that looks like me that wants to get into politics I will be right there to help point them in the right direction.”

Panelists gave advice to students considering a career in politics and public service. Ron Christie, Special Assistant to the President during the George W. Bush Administration who serves as a GU Politics Advisory Board Member and a McCourt School of Public Policy Adjunct Professor, encouraged students to “remember who you are when you go in and hold on to that person, don’t let the job change you.”

This conversation was moderated by Fall 2016 GU Politics Fellow Juana Summers, who is currently a political reporter with National Public Radio.

You can watch the event in the video below. 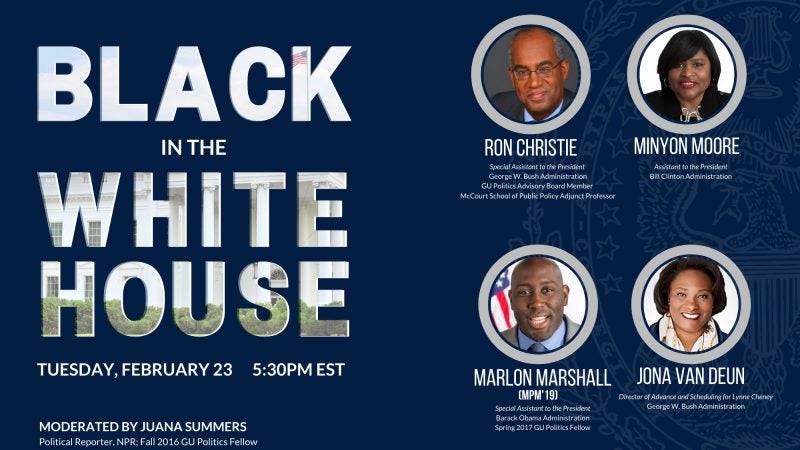