Washington, D.C. — Just weeks after the fall’s midterm elections, voters feel strongly that the country’s democracy is being threatened. While a lack of respect and civility in politics continues to remain an issue for voters, there’s not a lot of agreement on why Americans feel this way.

According to the latest Georgetown Institute of Politics and Public Service (GU Politics) Battleground Civility Poll, an overwhelming 75% of Americans believe that “democracy is under attack,” as opposed to only 24% who disagree. This belief cuts across party lines with 80% of Democrats, 72% of Republicans and 64% of Independents sharing this concern.

Beyond that, voters are more divided on other concerns, driven by partisanship and where they get their information:

“It’s clear that Americans are united in their belief that democracy is facing a serious stress test right now,” said Mo Elleithee, Executive Director of the Georgetown Institute of Politics and Public Service.  “But understanding how partisanship and news consumption drives very different narratives of why democracy is under assault, is critical to our understanding of how we can restore trust in our institutions.”

The poll showed that voters are concerned about divisive forces yet are ready to embrace political leaders who are willing to engage in increased civility, respect and collaboration. When asked to rate the level of political division in the country on a scale from 0 to 100 where 0 is no division and 100 is division on the edge of a civil war, respondents led to a mean score of 71.00, a slight decline to the mean score 71.74 recorded in July 2022.

When asked to rate the level of political division expected one year from now, respondents expect the temperature to go down slightly with a mean score of 68.4. Democrats are a bit more optimistic expecting the level of divisiveness to drop (-4.1 points) when compared to Independents (-2.8 points) and Republicans (-1 point) who are a bit less optimistic. The middle-class is also following this trend by varying degrees between middle class white voters (70.8 to 68.1), middle class African American voters (74.6 to 68.7) and middle class Hispanic voters (72.9 to 70.4).

More than eight-in-ten Americans agree about the value of compromise, respect, and civility. Ninety-five percent (95%) believe respect for one another is the first step to having a government that works while ninety-two percent (92%) agree with the statement civility is the language of respect.

Common Ground vs. Fighting the Other Side

However, when forced to make a choice, voters express a clear preference (68%) for leaders who will compromise to get things done, over leaders who don’t.

The poll indicates voters are open to elect leaders who are willing to engage in civil discourse over political violence. Eighty-six percent (86%) of Americans think the main goal of political leaders should be to compromise and find a common-ground while ninety percent (90%) say it is never justified to use violence in order to advance a political or public policy goal. Nearly two years after January 6th, this reveals Americans are ready to move forward and elect leaders willing to work with both parties.

The latest GU Politics Battleground Civility Poll of 800 registered voters was conducted by Republican pollster and former GU Politics Fellow Ed Goeas and Brian Nienaber of the Tarrance Group, and Democratic pollsters Celinda Lake, Daniel Gotoff, Sandra Markowitz, and McCauley Pugh of Lake Research Partners between November 12-17, 2022, and has a margin of error of + 3.5%.

To learn more about the poll, see the questionnaire, charts, tables, and analysis visit: https://politics.georgetown.edu/battleground-poll/

Academics, researchers, and journalists can also access the full dataset to assist in their own research and analyses. [Note: Any use of this data and material must credit the Georgetown Institute of Politics and Public Service Battleground and Civility Poll.]

ABOUT THE GEORGETOWN INSTITUTE OF POLITICS AND PUBLIC SERVICE BATTLEGROUND POLL:

The Georgetown Institute of Politics and Public Service Battleground and Civility Poll is a national bipartisan survey measuring political opinion and civility among registered voters in the United States. Produced by Republican strategist Ed Goeas of The Tarrance Group and Democratic strategist Celinda Lake of Lake Research Partners, this polling series offers unique polling analysis and insights from two top pollsters from different sides of the aisle.

With the GU Politics partnership, a Civility Poll was introduced in 2019 to track voter attitudes about polarization in politics.

ABOUT THE INSTITUTE OF POLITICS AND PUBLIC SERVICE:

The Institute of Politics and Public Service (GU Politics) connects and empowers students and the broader community to improve and reimagine politics and public service and reaffirm its promise. Founded as part of the McCourt School of Public Policy in the fall of 2015, GU Politics programming is open to the entire Georgetown community.

The Georgetown University McCourt School of Public Policy is a top-ranked public policy school located in Washington, D.C., the heart of the policy world. The McCourt School’s mission is to teach our students to design, analyze, and implement smart policies and put them into practice in the public, private, and nonprofit sectors, in the U.S. and around the world. 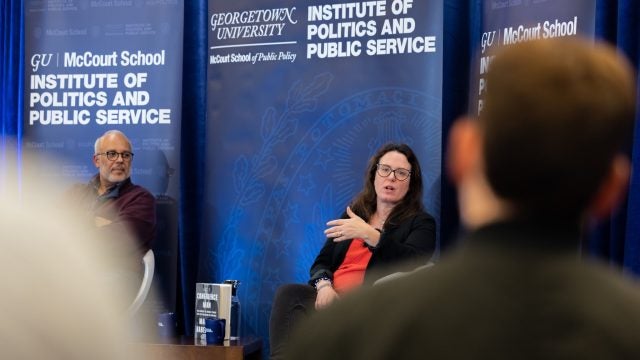 Behind the Scenes of ‘Confidence Man’ with Maggie Haberman

On the heels of the release of New York Times journalist Maggie Haberman’s new book, ‘Confidence Man: The Making of Donald Trump and the Breaking of… 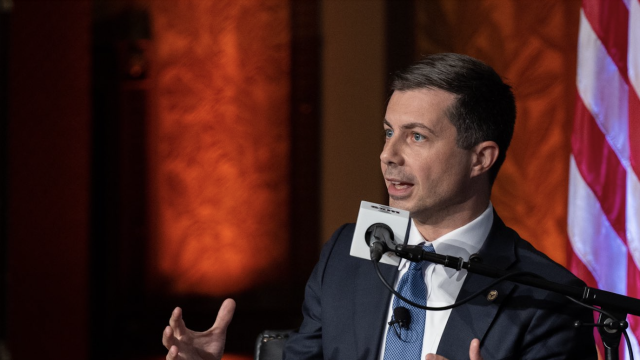 Secretary of Transportation Pete Buttigieg discussed new transportation and infrastructure policy, climate change and environmental justice, among other issues in a town hall-style discussion with students and faculty in…