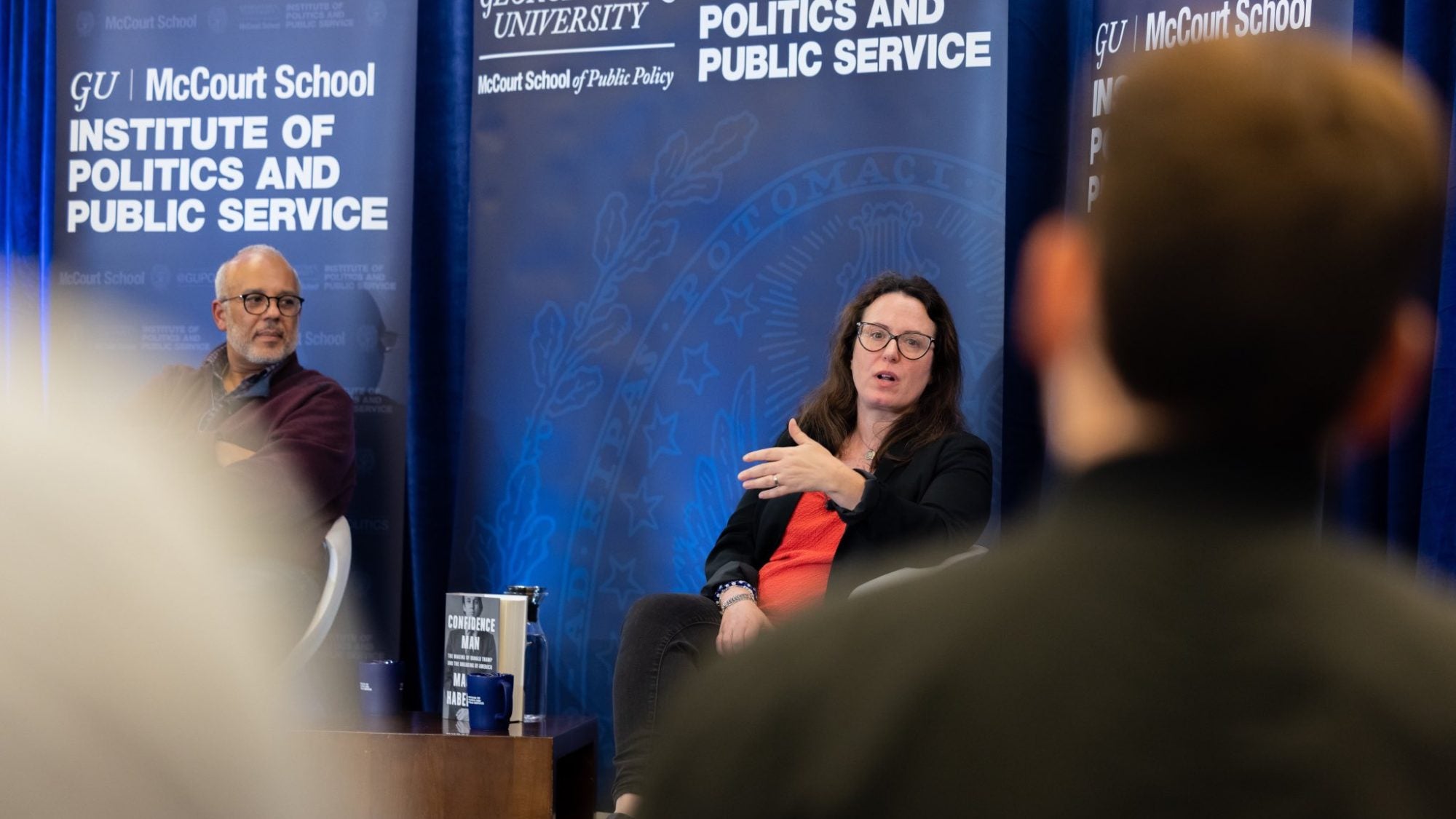 Title: Behind the Scenes of ‘Confidence Man’ with Maggie Haberman

On the heels of the release of New York Times journalist Maggie Haberman’s new book, ‘Confidence Man: The Making of Donald Trump and the Breaking of America,’ the Georgetown Institute of Politics and Public Service at the McCourt School of Public Policy invited her to speak candidly with GU Politics Executive Director Mo Elleithee on her highly anticipated book and what it is like to be one of the few journalists who has found their way inside the mind of former President Donald Trump.

Few people understand Trump the way Haberman does. Her unique ties to New York City, objective perspective and trusted political voice have led her down a path of nearly complete access to a man who has single handedly reshaped the Republican party.

And, as fate would have it, Haberman arrived to Georgetown University on the precipice of Trump’s third presidential bid.

However, despite the impending announcement, there was still plenty for Haberman to discuss outside of what was sure to be a front-page story the next day – such as the future of the Republican party, the next chapter of Trump and what it’s like to cover such a polarizing figure.

‘Confidence Man’ does what many biographies on Trump do not do: it takes you back to his life before; the life that helped to shape the man we saw on the campaign trail and in the White House. In her discussion, Haberman made clear Fred Trump, Donald’s father, and the yesteryears of New York real estate and business all heavily influence the Trump and his idiosyncrasies we are familiar with today.

When Trump finally made true on his word to run for President – something he had more casually thrown around in the past – Haberman, who had been covering Trump since the late 90s, was given the opportunity to have a front-row seat to Trump as a true candidate as she was hired to cover the 2016 presidential election. And with this role came a whirlwind of an election cycle and four years of an administration that reshaped politics and how it is covered.

The release of ‘Confidence Man’ came as the 2022 midterms were winding down and the red wave falling flat; though Republicans did manage to take back the U.S. House of Representatives.

Despite not being on the ballot, Trump had a lousy election; none of his backed candidates won their Senate or gubernatorial races this cycle – which, Haberman explained, likely was a driving force in moving up his 2024 bid announcement in an effort to shift focus away from losses and the release of former Vice President Mike Pence’s new book.

With the same brutal honesty with which she reports, Haberman answered questions directly from students about Trump and her life as a high profile journalist. When asked about her “relationship” with Trump through her years of reporting, Haberman refuted the idea of any sort of relationship with Trump; rather there was more a mutuality of both parties gaining what they set out for – publicity on one side and fair reporting on the other.

Aspiring political journalists in the crowd wanted a political insider’s predictions of the Republican party, with Florida Governor Ron DeSantis being the question mark on many people’s minds. While other students wanted to know what it is like to be a journalist in 2022.

Haberman answered all questions and more; while also offering insight into how she balances motherhood, her family and taking time for herself in an era of growing hostility for news and those who report it.

This article was written by Kathryn Chavez (MPP’23), a contributor to On The Record, a GU Politics publication.