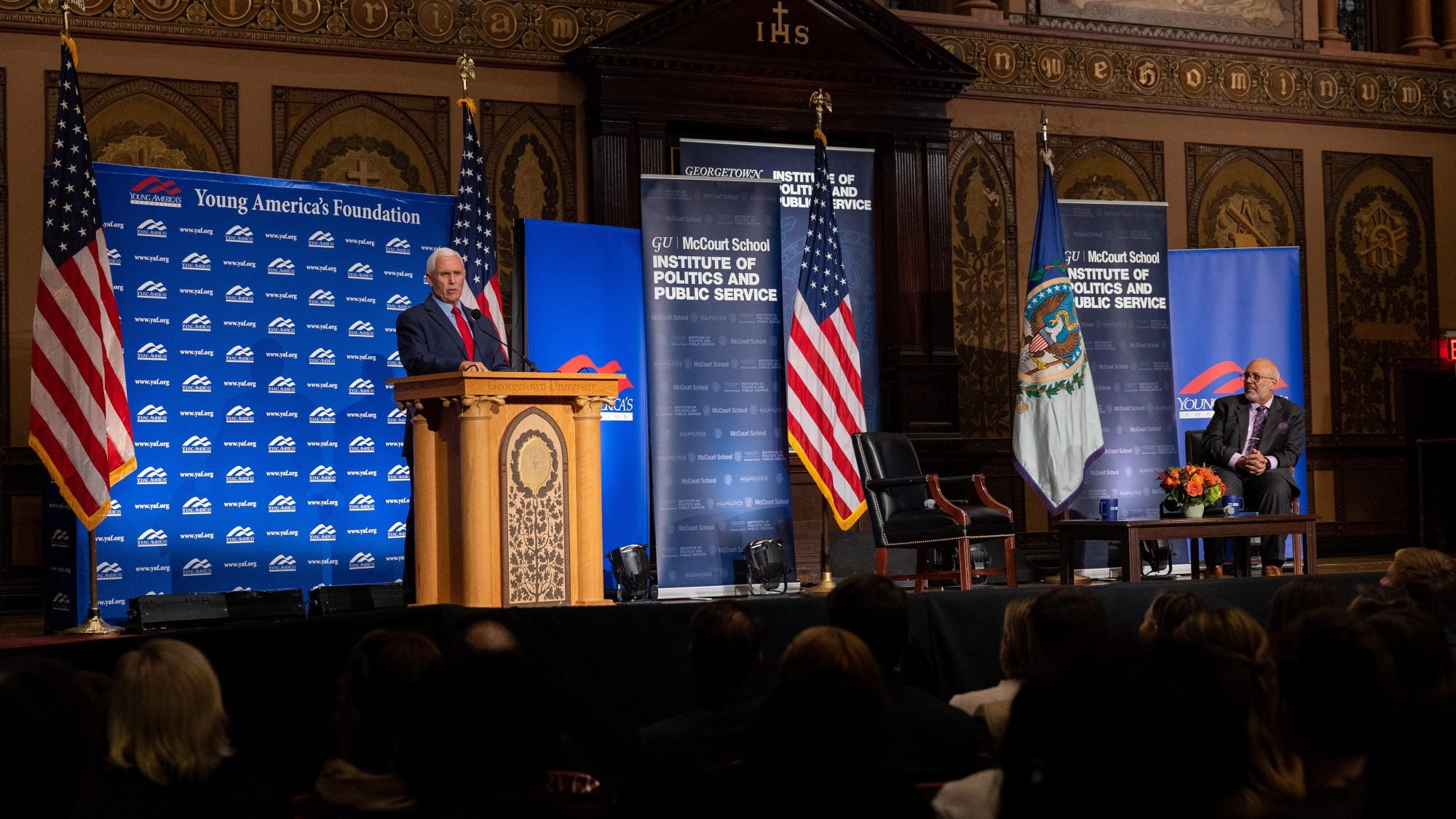 Title: The Future of the Conservative Movement through the Eyes of Vice President Mike Pence

The Georgetown Institute of Politics and Public Service at the McCourt School of Public Policy hosted former Vice President Mike Pence in conversation with Executive Director of GU Politics Mo Elleithee for a candid conversation and question and answer session with the audience. The event was co-sponsored by the Young America’s Foundation (YAF).

Much of Pence’s speech was focused on how his faith was so intertwined with influencing his political identity and the ways in which  Christianity has helped him personally reckon with political polarization. Beginning the event with a personal anecdote, Pence spoke about how the values of Christianity, his Indiana upbringing and how politicians he admired and looked up to, such a President Ronald Reagan, shaped his political ideals.

After a few unsuccessful bids for Congress in the late 80s and early 90s, Pence became a conservative radio talk show host, but never lost the ambition and aspiration to run for public office. And, in 2000, Pence ran for and won the Congressional seat in Indiana’s second Congressional district.

“When you think your dreams have drifted away, sometimes they come back around and this one did.”

This particular story resonated deeply with Henry Chen, a student in the audience, who said listening to Pence filled him with hope and inspiration.

During his time serving Indiana, both in Congress and as Governor, Penceworked with his colleagues of all ideologies across the political aisle. In his speech, Pence noted the importance of respecting others with differing opinions.

Pence also put an emphasis on pinning down the issues we can agree on and then finding common-ground to figure out solutions that work for all Americans – noting it must begin with mutual respect.

“It begins with treating others the way we want to be treated and I really do believe that there’s a hunger in this country today for getting back to the way Americans deal with one another.

Deepa Phuyal, another Georgetown student who attended, did not necessarily agree with much that Pence had to say but she attended the event because she dislikes how polarized people have become and is eager to hear opposing viewpoints to better understand where others are coming from.

Georgetown students were also given the opportunity to engage with the former Vice President  in a candid and robust question and answer session after his speech. Students from across the political spectrum took turns asking Pence a series of thoughtful questions, each posed with respect and civility..

As the evening wrapped up, Pence urged students who are looking toward a career in public service to use this time in their life to develop the qualities that will make them the better leaders of tomorrow.

This article was written by Anisa Nanavati (SFS’26), GU Politics Student Associate. Watch a recording of the discussion here.