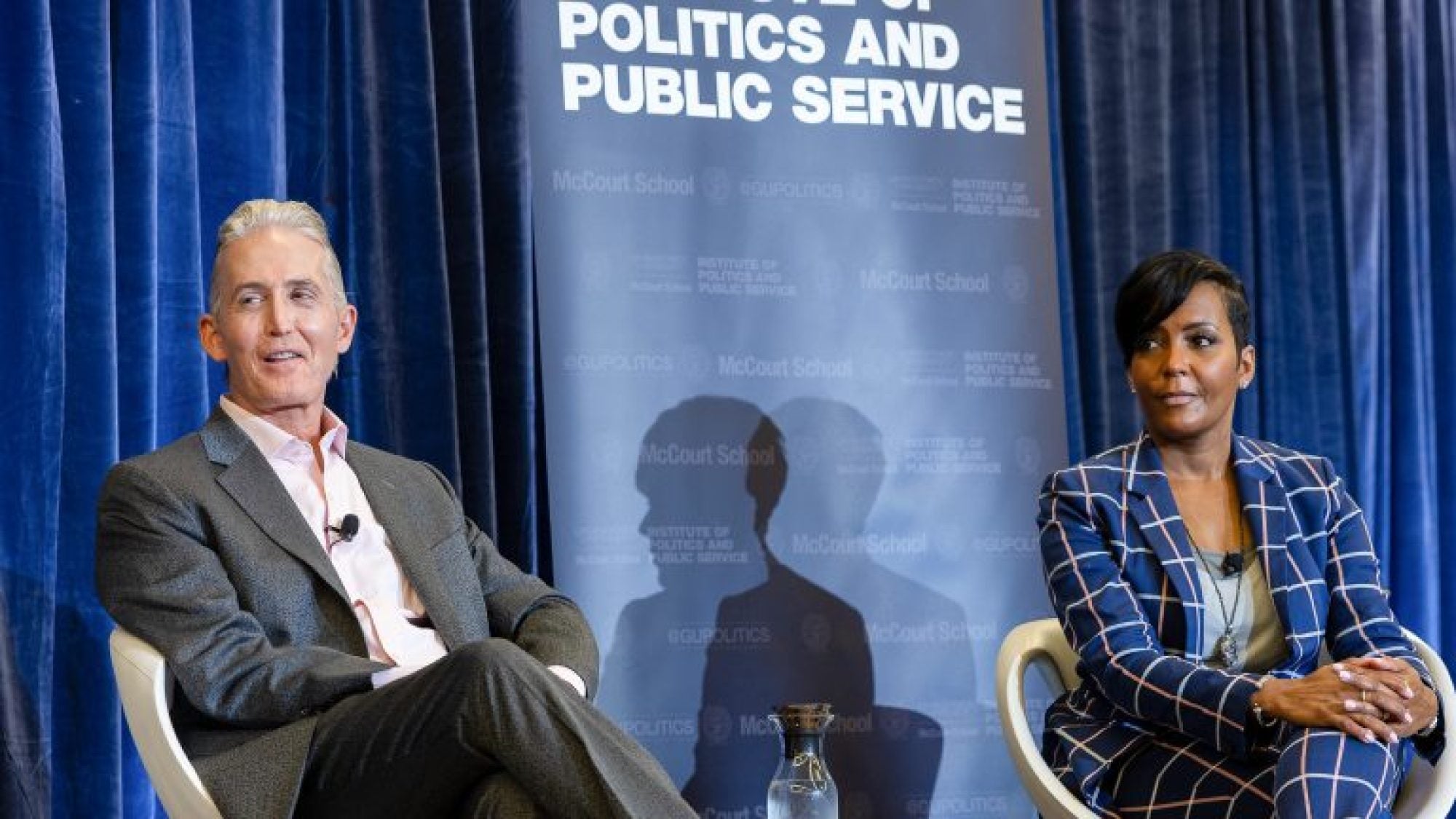 The motto of Georgetown’s Institute of Politics and Public Service is “public service is a good thing, politics can be, too.” This message was further ingrained in the minds of attendees and listeners of the inaugural Ceasefire event, Bridging the Urban-Rural Divide, a defining partition in politics today. The event featured former Atlanta Mayor Keisha Lance Bottoms (D) and former South Carolina Congressman Trey Gowdy (R). Ceasefire’s focus is to uphold GU Politics’ mission of combating political polarization by creating spaces for bipartisan conversation. By bringing together two distinguished public servants, experts at representing their constituencies, this forum explored what rural and urban voters are looking for in their representatives, the issues they care about, and finding commonality.

“The closer you are to an urban area I think the more you get to see what your government can do and what your tax dollars can do, and the further removed you are from parks then maybe the less you understand why we need our tax dollars to go for a park” – Congressman Trey Gowdy

A recurring theme was the lack of interconnectedness between urban and rural citizens and the misconception that they are the enemy of one another because of their different policy goals. Mayor Bottoms emphasized her belief that this misconception stems from a belief that “cities are the enemy and that we are takers and not givers.” In response, Congressman Gowdy underscored his belief that voters need to understand why they are being taxed in order to bolster their chances of support.

Our economy, recognizing it as a highly competitive and segregating issue among rural and urban citizens, was a common point of discussion. Congressman Gowdy affirmed that in his view “we’ve moved to a service-based economy so, if you want work, you drive into the city. I think that may wind up being the best hope for curing the divide…the more time you spend around people not like yourself the more appreciation you have for them.”

“So we all want health care, quality health care, we want quality education, we want safe communities. I think we’re there on what we want. How we get there together, I think, is the bigger question…. I just don’t think we message it as an agreement.” – Mayor Keisha Lance Bottoms

Mayor Bottoms and Congressman Gowdy agreed that both rural and urban citizens can pinpoint the issues and the aspects of our government and our policies that need to be reformed. Although there is a tendency for rural voters to lean conservative and urban voters to lean liberal, the heart of the matter is that geography should not be an attribute or determinant of compromises and adaptable policies. Congressman Gowdy described this as an “us versus them” phenomenon. Mayor Bottoms recognized that “there are these issues that are important to all of us. There’s commonality there, I think we just need to be bolder as leaders and, and less timid in what we know our communities need and what our people are asking for and push for it.”

This article was written by Mila Noshirvani, GU Politics’ Summer 2022 intern and rising Senior at the Georgetown Day School in Washington D.C.