It’s the start of a new semester, and you know what that means — a new class of Fellows at the Georgetown Institute of Politics and Public Service!

Each semester, we bring in leading practitioners to explore with students how to do politics better. The Spring 2022 Fellows bring decades of experience in politics, government and journalism to the Hilltop, and come from different places on the ideological spectrum. But while each Fellow has their own theme and area of focus, they share a common goal to work with students to advance the common good, bolster democratic institutions, and lead with a service-oriented passion for a purpose larger than oneself.

So, without further ado, meet the Spring 2022 GU Politics Fellows!I hope you’re as pumped about them as we are. They’re excited to get to campus and start working with you! 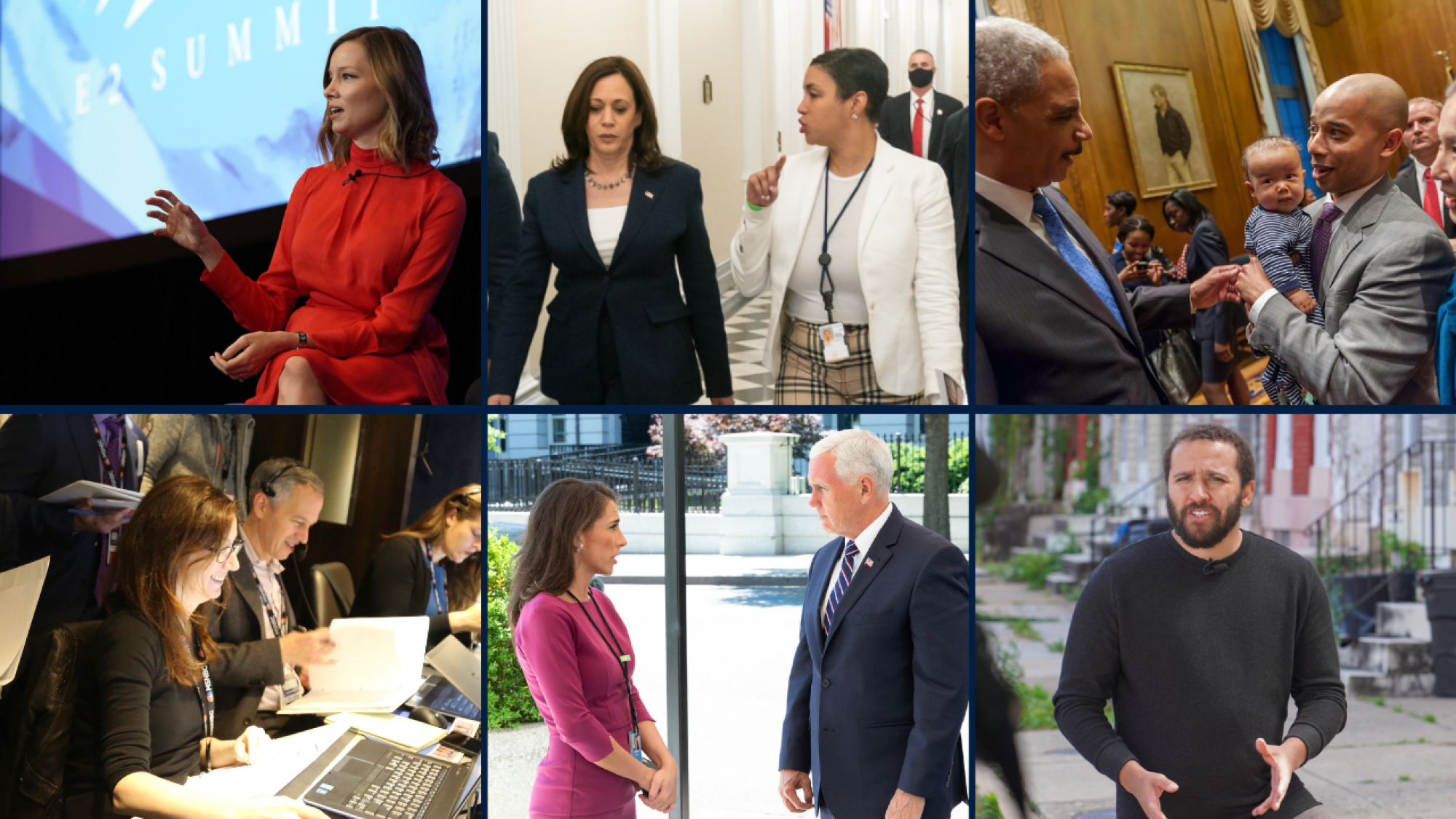 Ashley Etienne served as Communications Director to the two highest-ranking women in American history — Vice President Kamala Harris and Speaker of the House Nancy Pelosi. The first woman and person of color to hold that position for the Speaker. Ashley has also served as Special Assistant to the President and Director of Communications for the Cabinet in the Obama-Biden Administration and also led communications on President Obama’s signature My Brother’s Keeper initiative. Ashley’s discussion group is called ​​A Seat at the Table: The Politics of Power.

Dafna Linzer was most recently the Managing Editor for Politics at NBC News and MSNBC where she was responsible for editorial across broadcast, cable and digital platforms. Prior to this role she built and launched MSNBC’s digital program bringing the newsroom into the digital age. She was a senior investigative reporter at ProPublica, national security correspondent with The Washington Post, and a senior editor on the Associated Press’s foreign desk. Dafna’s discussion group will focus on Trust in Government.

Wesley Lowery is a correspondent for 60 Minutes+, the streaming version of CBS News’ iconic broadcast 60 Minutes. A Pulitzer Prize-winning reporter and author, Wes is one of the country’s foremost journalists on issues of race, law enforcement, and social justice. Over the past decade, Lowery has extensively chronicled police shootings and the Black Lives Matter movement and interviewed leading newsmakers on these topics. Wes’ discussion group is about The Media in This Moment.

Kristen Soltis Anderson is a nationally respected Republican pollster, commentator, and author of The Selfie Vote: Where Millennials Are Leading America (And How Republicans Can Keep Up). She is a founding partner of Echelon Insights, an opinion research and analytics firm. Kristen is host of SiriusXM’s “The Trendline with Kristen Soltis Anderson” on their nonpartisan P.O.T.U.S politics channel. Kristen’s discussion group is on Polling, Polarization, and the Value of Listening in American Politics.

Elliot Williams is a CNN Legal Analyst and a regular SiriusXM guest host. He served as deputy assistant attorney general for legislative affairs at the Department of Justice, and he spent several years as assistant director for legislative affairs at U.S. Immigration and Customs Enforcement. Elliot is also a principal in The Raben Group’s Government Affairs Practice Group. Elliot’s discussion group is called Politics and the Law Square Off. Which Wins?

The GU Politics Fellowship offers students a rare peek behind the curtain into the way DC actually works — brought to them by insiders actively in the arena. Students will be challenged, informed, and inspired through weekly discussion groups, office hours, and small group conversations.

Be sure to mark your calendars for our GU Politics Fellows Fest— the first chance to meet these leaders virtually, learn more about their backgrounds, and hear what they have planned for the semester. In keeping with current University guidelines, the open house will be held virtually on Thursday, January 20th from 4-5:30 PM — but don’t worry. You’ll get a chance to meet all of the fellows in person as soon as COVID protocols allow.

We look forward to a great semester of constructive dialogue, popping filter bubbles, and strengthening democracy.