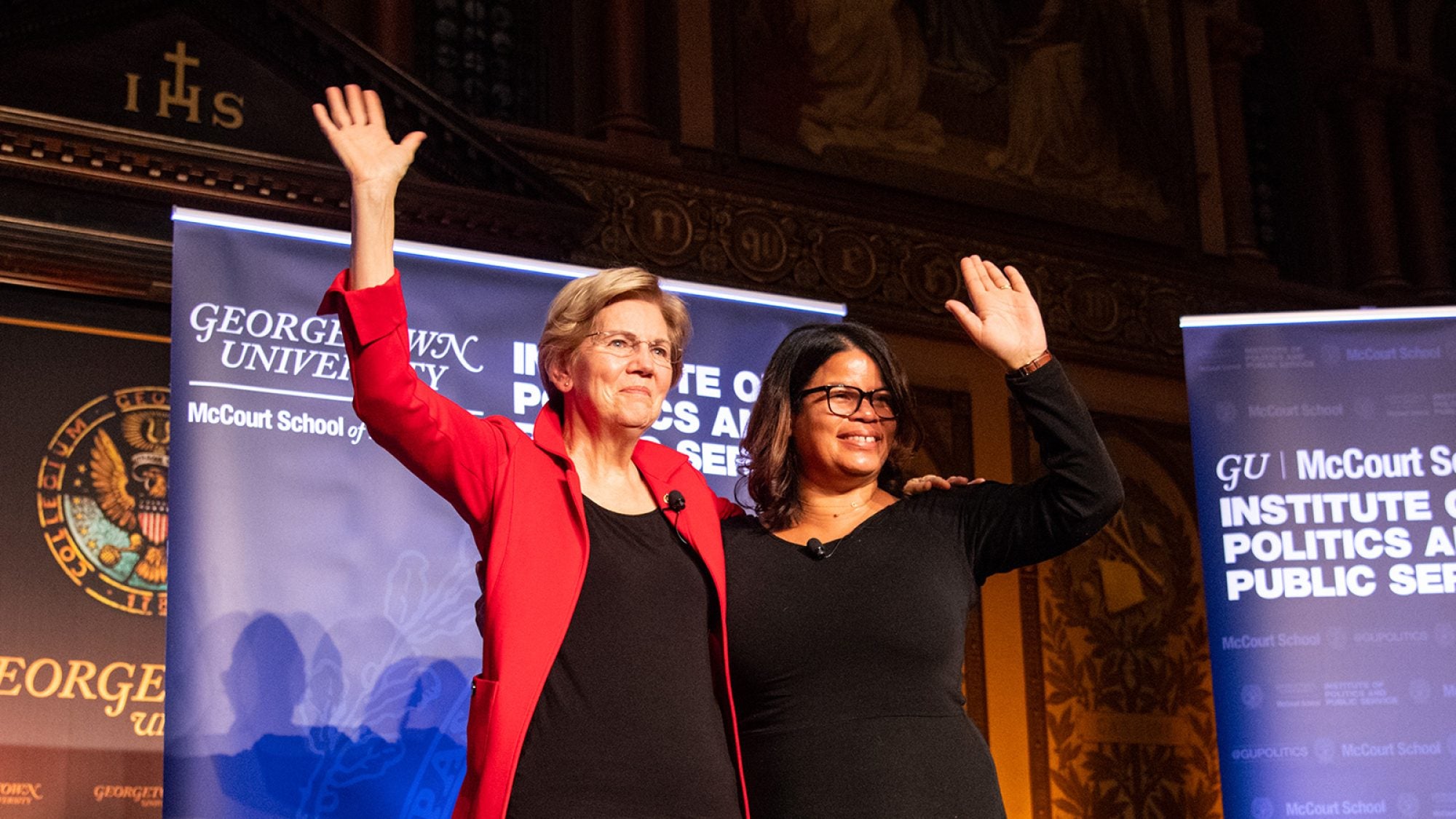 The Georgetown Institute of Politics and Public Service at the McCourt School of Public Policy hosted Sen. Elizabeth Warren in conversation with GU Politics Fall 2021 Fellow Rebecca Pearcey for a discussion on health inequalities heightened by COVID-19, the challenge of economic recovery and the responsibility of policymakers to support those who are too often left behind.

Bringing more than 500 students to Gaston Hall for one of the largest Forums of the semester, Sen. Elizabeth Warren addressed the growing health, economic and opportunity disparities in the United States.

“Public health infrastructure needs to be strengthened, and it needs to start with [prioritizing] human beings.”

Noting the disproportionate effects of the pandemic on communities of color, challenges of access to healthcare and the concurrent financial strain on families as “crisis is felt differently”, Warren highlighted the necessity of strengthening health infrastructure and recognizing its link to numerous aspects of well-being.  “Think about health infrastructure — it’s also about transportation, it’s also about housing, it’s also about food security — and so if we build out in that direction, it helps us all” said Warren.

“It is not enough to write a policy that so long as you didn’t deliberately discriminate against someone overtly…you must stop and ask yourself with every one of these policies, what’s going on here? And who does this effect? And how is this affecting communities that have been left behind?”

The Senator expressed how policymakers must consider ways to address inequality and benefit communities that have been left behind. Warren mentioned tax policy as a measure which can play a role in advancing equality by supporting the next generation, who faces a world reshaped by the pandemic. “We need to change tax law in America so that it focuses on those at the very top and says we are going to invest across the board in developing opportunities for all young people in this nation” asserted Warren.

The GU Politics Forum, where students directly engaged with the Senator, posing questions and hearing her insight, resonated with students.

Students involved with GU Politics’ flagship digital journalism program, On the Record, had the opportunity to cover the event alongside members of the mainstream press. These student journalists were issued hard passes and got to witness firsthand how national news outlets reported on remarks from a United States senator; they also filed their own stories with insights from Warren’s remarks.

Recognizing the challenge of the work ahead to promote equality, Sen. Warren emphasized the necessity of determination and resolve: “You have to be willing to get into fights that you could lose…if you’re always going to fight fights you can win, then that cannot be the test, because we will not make real change under the circumstances. What’s always tough to evaluate is if you’re going to lose this one, is the fight nonetheless important? And I mean well worth it. And the answer sometimes is you bet it is.”

This article was written by Christianna Doele, a sophomore in the School of Foreign Service, and a GU Politics Student Associate.