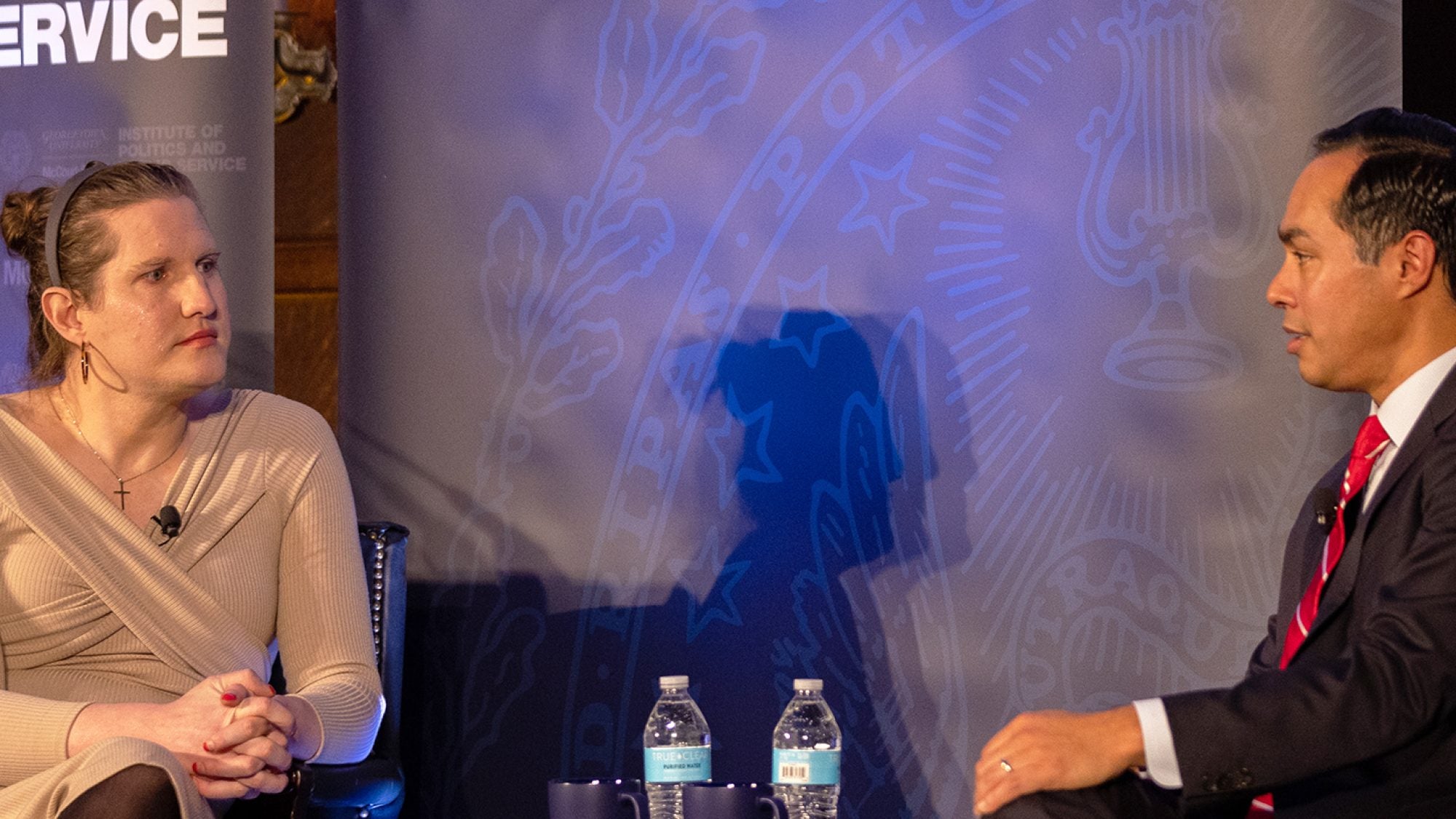 Title: An America for All: A Conversation with Former HUD Secretary Julián Castro

On November 10, 2021, the Institute of Politics and Public Service organized a GU Politics Forum featuring former Housing and Urban Development Secretary Julián Castro for a conversation on how to build a more inclusive America. The program was moderated by Fall 2021 GU Politics Fellow Charlotte Clymer (S’16).

The Hoya attended and wrote a recap of the event which can be read in its entirety on their website. An excerpt is found below:

Public servants have a responsibility to deliver concrete benefits to constituents and work to include and protect marginalized groups, according to Julián Castro, former secretary of housing and urban development and 2020 presidential candidate.

At the Nov. 10 in-person event, titled “An America for All,” Castro argued policymakers should focus on local action and hot-button issues and encouraged students who care about social justice to become involved in public service. The Georgetown University Institute of Politics and Public Service hosted the event moderated by GU Politics Fellow Charlotte Clymer (COL ’16).

Politicians on the state and federal levels should work to create real change in the lives of their constituents through policy, according to Castro.

“What moves people a lot of the time is what directly impacts their lives. The thing about local government is that you did not have to wait to see the impact of your work,” Castro said at the event. “If I had that pothole fixed or saw the sidewalks built or got more public safety investment, people could measure it. People could see the difference that you made or the lack of a difference you made.”

In addition to delivering measurable benefits to constituents, policymakers should also address wider hot-topic issues, according to Castro.

“When we address the issue of race or trans rights or everything else that gets put under the rubric of culture wars, we are also standing up for people who oftentimes have been vilified and have been some of the most vulnerable folks in our country,” Castro said. “We don’t want to slide backwards.”

According to Castro, politicians must include transgender people in conversations regarding effective policy around transgender rights.

“We were primed more from the get go, not only to be more accepting, but to try to be stronger allies — asking how we can be better allies and translate that into policy and be supportive of that policy, And to help move along what still needs to be moved along. That’s what I tried to do on the debate stage — to be more inclusive,” Castro said. “And in being inclusive hopefully to help set a blueprint for where the party and the country need to go in the years to come in how we think about issues.”

State legislators around the country introduced a record number of bills to limit transgender peoples’ rights, with lawmakers in 28 states considering 93 bills targeting the rights of transgender people, including health care restrictions and bans on participating in sports, according to a Human Rights Campaign report.

According to Castro, in addition to advocating for the transgender community, politicians should also focus on supporting immigrants, especially undocumented people living and working in the United States.

“It disappoints me to no end that we live in a country where it’s so easy to stoke fear and division based on someone’s status. And also underneath that, not for everybody but underneath that, a lot of times, based on the color of their skin and their nationality. It is a deeply, deeply disappointing part of this country,” Castro said.

As part of Castro’s bid for the presidency in 2020, his campaign largely focused on immigration, drawing from his personal experience as the son of a Mexican immigrant. His platform included policies like a streamlined path toward citizenship for undocumented essential workers.

As lawmakers across the United States continue to debate transgender and immigrant rights, students who care about domestic issues should take initiative and get involved in politics and advocacy, according to Castro.

Visit the GU Politics Twitter (@GUPolitics) for highlights and excerpts from the event.