The panelists discussed how well American democracy has adjusted to the digital age and how hate speech, conspiracy theories, and extremist groups have proliferated on the internet. The conversation covered what tech companies are doing to combat hate speech, QAnon, and misinformation as well as how public policy should adjust to new threats and opportunities in a digital democracy.

Jonathan Greenblatt argued, “Freedom of speech isn’t the freedom to slander people, and freedom of expression shouldn’t be the freedom to incite violence. And yet (tech platforms) have taken the First Amendment to an extreme beyond what the Founding Fathers had in mind.”

Issie Lapowsky discussed her reporting on major social media platforms and how extremist groups have been allowed to stay active on various websites despite established policies against hate speech. “A really big misconception about these (tech) companies is that they’re just flying by the seat of their pants or they have no rules… The problem is that these platforms are just so large and so those policies aren’t always enforced the way they should be.”

Deplatforming known hate group leaders and accounts was discussed as a possible solution. Lapowsky noted, “Facebook benefits from network effects, so if three billion people are on Facebook that means not only the diehard hate mongers stumble upon this content but so will the people who are hate-curious or maybe susceptible to manipulation. And so you end up bringing in a lot of people who maybe wouldn’t fall victim to these ugly mindsets and perpetuate them. When you move onto a platform like Parlor that is self-selecting, it’s going to reduce the audience that is exposed to that content.”

Margaret Huang (SFS’91) spoke on behalf of the Southern Poverty Law Center: “We’re supportive of deplatforming people who are using mainstream social media platforms to promote (extremist) ideologies. It matters when you take people… off of those platforms because their audience is immediately shrunk.”

The entire conversation along with a quick recap video highlighting stand-out moments is available on the GU Politics YouTube channel. 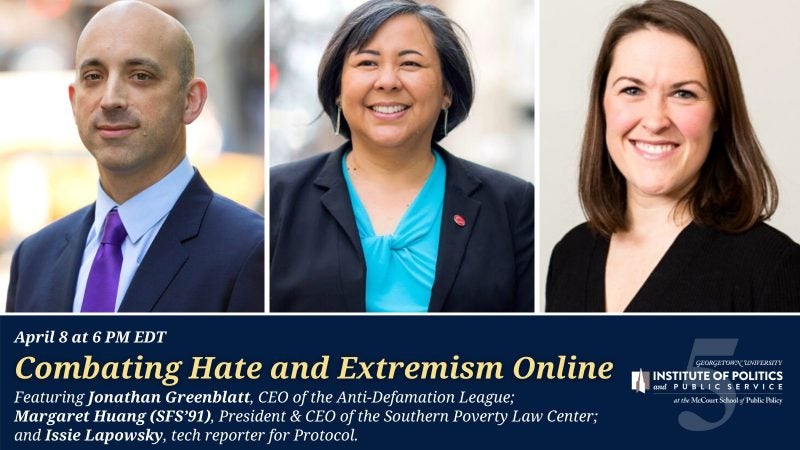