Title: A Conversation on Protecting Election Integrity with Chris Krebs

Chris Krebs was tasked with overseeing the U.S. government’s efforts to secure our election processes from actors at home and abroad. In 2018, Congress officially created the Cybersecurity and Infrastructure Security Agency (CISA) under the Department of Homeland Security, to which President Trump appointed Krebs as the first director. Krebs was fired from the position in November 2020 after publicly defending the integrity of the election infrastructure and rejecting conspiracy theories about election results. Prior to his tenure at the Department of Homeland Security, Krebs led Microsoft’s U.S. policy work on cybersecurity and technology issues.

At the GU Politics Forum, Krebs addressed conspiracy theories surrounding the results of the 2020 presidential election, saying, “We know there wasn’t any interference. We not only didn’t see any activity that would lead to any sort of suspicion of tampering, but the proof was in the ballots. You could go back and audit and recount, and that’s what Georgia did.” Krebs encouraged the continued use of paper balloting for elections.

He mentioned the electoral ramifications of statements made by public officials about election integrity concerns leading up to the election: “There was a chilling effect on Republican turnout in some states because of the President saying that it wasn’t a secure process.”

Krebs shared his prediction that threats against election workers “is going to have a chilling effect, and there will be a lot of attrition among election workers.” Krebs urged Georgetown students and the GU Politics Forum guests to sign up to be election workers at the local level. “I recommend that everyone for at least one cycle volunteer to be an election worker. Get out there and understand how our democracy works and the process.”

The conversation turned to CISA’s efforts to combat disinformation and misinformation. “We’ve ramped up efforts to disrupt the supply of disinformation… But there is a pull factor for conspiracy theories and disinformation operations where it is finding willing buyers… That is where we have a lot of work to do as a society,” Krebs said.

Krebs urged technology companies and individual consumers to make smart choices about how the products they make and purchase contribute to security concerns. “Somewhere we have to put additional thought on how we make [technologies] more secure… We haven’t seen, yet, security as a differentiator (in what products we purchase). That’s the evolution we’re about to see…”

This event was co-hosted by Georgetown University Center for Security Studies. You can watch the full video or a short recap with highlights from the event on the GU Politics YouTube channel. 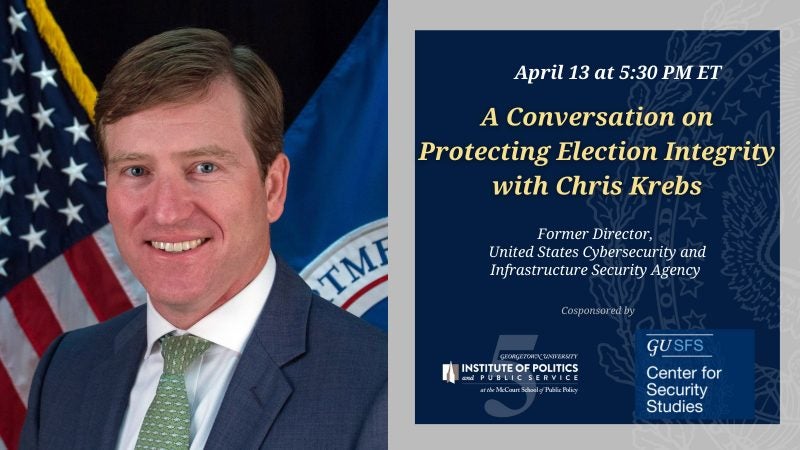