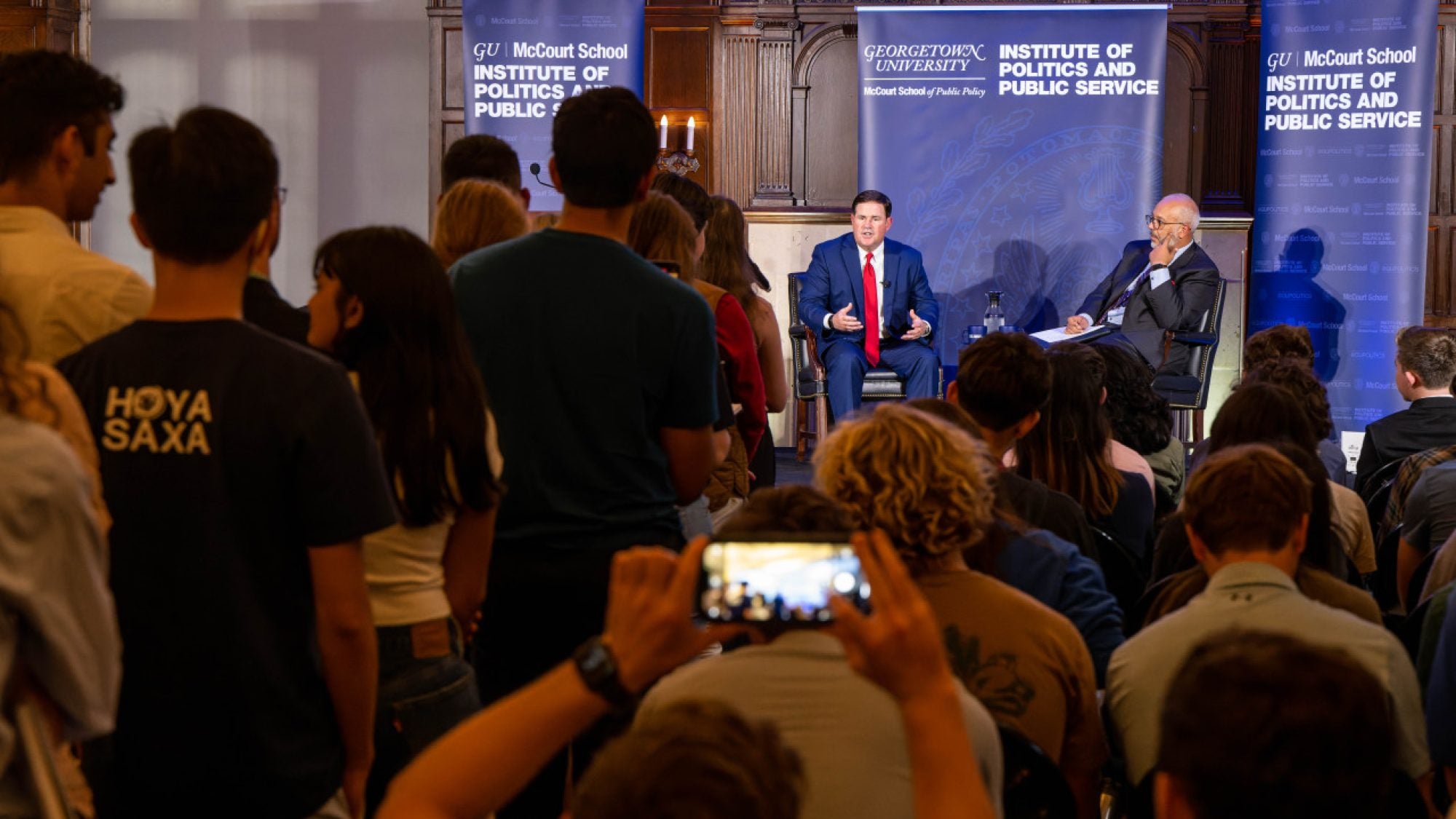 Georgetown University’s Institute for Politics and Public Service at the McCourt School of Public Policy hosted Arizona Governor Doug Ducey (R-Ariz.) in conversation with GU Politics Executive Director Mo Elleithee for the first conversation in the Midterms 2022: What’s at Stake series, which is focused on the battle for statehouses.

Ducey, the Chair of the Republican Governors Association (RGA), evaluated the forces at play in competitive gubernatorial races and the challenges republicans face in contemporary politics and governance.

“These are very competitive races that have high stakes in terms of consequences.”

Noting the RGA’s strategic commitment to its 27 incumbents amid a competitive election season, Ducey remained optimistic about gubernatorial races in New Mexico, Wisconsin and Kansas, among other key states.

This midterm cycle, Georgia is of particular interest to both the Republican and Democratic parties and Ducey noted there is a large possibility Georgia voters could split their ticket – voting for incumbent Governor Brian Kemp (R-Ga.) and incumbent U.S. Senator Raphael Warnock (D-Ga.).

He said Republican governors have proven their ability to steer their respective states in a positive direction, particularly those considered ‘swing states.’

In contrast, Ducey argued Democratic governors have failed to adequately counteract inflation and crime, driving voters across the aisle.

Ducey also expressed the RGA’s willingness to support candidates in tough races so long as they are able to fundraise and persuade voters independently of the RGA. “We don’t fund lost causes, and we don’t fund landslides,” Ducey said.

“We believe in freedom. The person, people, and family and organizations come before the government.”

By focusing on individualized “kitchen-table issues,” Ducey argued Republican candidates appeal more directly to concerns about quality of life and personal liberty. In Arizona, he said lower income taxes in Arizona have allowed individuals to pursue the American dream in their own way.

He mentioned that it has enlarged Arizona’s tax base and ultimately funneled more funds into K-12 education. “The agenda that the typical republican governor has is an ‘opportunity for all’ agenda,” Ducey asserted.

Prompted by student questions, Ducey examined the surge of competitive political outsiders in electoral politics. Underscoring the recent success of the Youngkin campaign in Virginia, he argued “the electorate likes an outsider” – someone who they believe understands private-sector challenges and has first-hand subject matter expertise. He urged students to accrue apolitical expertise before competing for electoral office.

Reflecting GU Politics’s mission, Ducey emphasized the collaborative nature of the National Governors Association (NGA) – one that focuses on building a camaraderie and assisting in times of crisis, but still recognizes the ideological and policy differences between the parties.

Closing out, Ducey recognized the importance of civic participation and encouraged Georgetown students to stay engaged with government at all levels. In his home state of Arizona, he highlight a commitment to increase civic education and engagement in K-12 classrooms.

This article was written by Ava Uditsky (C’24), GU Politics Student Associate. Watch a recording of the discussion here.